Epic Poem Kalevala in the Art of Karelian, Russian and foreign artists 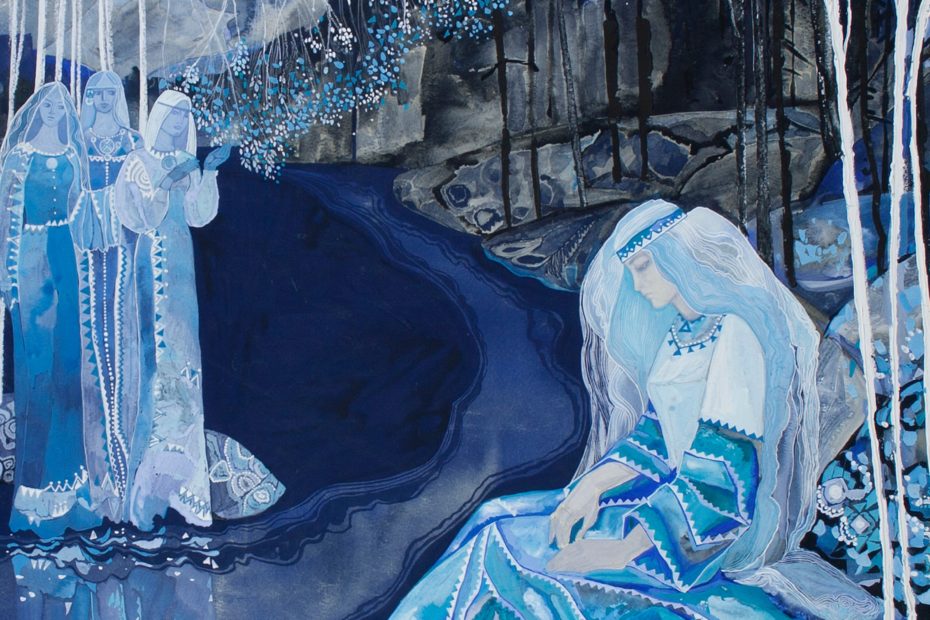 The Fine Arts Museum contains a unique collection of art works on the theme of the Karelo-Finnish epic poem “Kalevala”. At present, it counts about 700 exhibits. Its main part is made up by the book and easel graphic works executed by the artists from Karelia, St. Petersburg and Moscow.
Especially valuable are the drawings by M.P. Tsybasov and A.I. Poret – members of the artistic union “Masters of Analytical Art” headed by Pavel Filonov. Under his direct guidance, these artists participated in illustrating the first edition of “Kalevala” in our country («Academia» Publishers, 1933).

The main part of the collection is made up by the works of Karelian artists. Illustrations to the Karelo-Finnish epic poem is the best thing ever created during the short life of the Karelian Osmo Pavlovich Borodkin (1913 – 1949) Page illustrations, headpieces, and end pieces of runes contain Karelian characters, landscapes, and ornaments, skillfully stylized by the artist.

The National Artist of Karelia, Georgy Adamovich Stronk (1910 – 2005.), worked on “Kalevala” over 50 years. The Museum has his water colors from early 1950s and a set of illustrations to “Kalevala”, published in Petrozavodsk in 1956. “Kalevala” in his interpretation is a poem about heroes equal in spirit to Russian epic Bogatyrs.

There is a rather complete and diverse representation of “Kalevala” art by the National Artist of Russia Myd Marievich Mechev (born 1929). For many years, starting from 1950s, the artist turned to the theme of the epic poem. He “read” the ancient runes principally in a new way and saw high epic realism in them. The images of Mechev are filled with high moral ideals and music of the North.  “Kalevala” is the main theme in the art of the Honored Artist of Russia, Tamara Grigorievna Yufa (born 1937). In her figural interpretation, “Kalevala” is presented as a capturing song about a woman, her love and suffering. The Museum holds such widely known works of this artist of 1960 – 70s (“Aino”, “Pohjola Bride”, “Aino’s Mother”, etc.)

In the 1980s, the “Kalevala” collection of the Museum was extended thanks to the water colors of the honored artist of RKВ Nikolai Ivanovich Bryukhanov (1918 – 2004) from the series “Kalevala Motiffs”, and by illustrations of Boris Ravilievich Akbulatov (born 1949).

Many years of inspired work were devoted to “Kalevala” by a famous book artist, National Artist of Russia Valentin Ivanovich Kurdov (1905 – 1989). Precious acquisitions for the Fine Arts Museum of Karelia were the drawings of V.I. Kurdov (author’s versions) to “Kalevala” of 1979 (Leningrad, “Hudozhestvennaya Literatura” Publishing House). There is a significant collection of “Kalevala” theme works made by a famous St. Petersburg artist Yuri Konstantinovich Lyukshin (born 1949). In his works, the traditions of the “Filonov school” and Russian folk popular print.

The collection of “Kalevala” graphic works also includes sketches of stained glass “Heroes of Kalevala” by E. A. Akulov, as well as works of theater and decorative and applied art (scenery of A.A. Shelkovnikov to the “Sampo” ballet by Sinisalo, puppet sketches made by V.O. Polyakov for the Petrozavodsk Puppet Theater performance “The Song of Sampo”, small statuary of birch bark by V.A. Kostylev and wood carved panes by I.G. Gashkov).

The “Kalevala” collection is the most popular and movable part of the Fine Arts Museum funds, it is annually shown at exhibitions in the Museum, the items from this collection take part in international projects. “Kalevala” epic poem is an ever-living source and stimulus for modern artists.