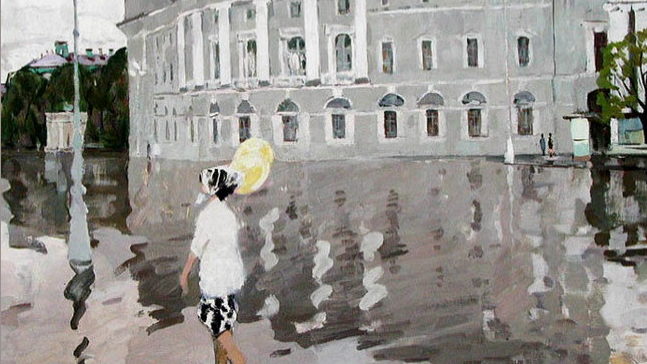 The Museum possesses a most valuable collection of Russian art of the 20th century. It counts about four thousand works created by artists from Moscow, St. Petersburg (Leningrad) and other artistic centers of the country.

Many works of the collection may be rightfully considered masterpieces of national art. Pictures of renowned Russian painters – Petr Konchalovsky, Alexander Os’merkin, Nicolay Romadin, Vladimir Stozharov, Evsei Moiseenko and others have been exhibited at prestigious art exhibitions in the country and abroad, were included in special editions, books and art albums.

The Russian art collection started to form in 1960s, from the first years of the Museum’s operation. By early 1970s, the acquisition became planned. The areas were defined that gave the collection some traits of originality and uniqueness:

– the theme of Russian North and Karelia in the works of art,

The Museum’s interest to the art of 1920-1930s allowed collecting the material reflecting the complicated period of development of domestic art and bringing to the surface some little-known names and unique phenomena. The prides of the collection are the works of Mikhail Tsybasov, Tatiana Glebova, Alisa Poret, Pavel Kondratiev – the pupils of Pavel Filonov, the most significant representative of Russian avant-garde art of the early 20th century.

The Museum became very famous thanks to the works of the most prominent representatives of Leningrad painting school of 1960-1980s – Zaven Arkashuni, Valery Vatenin, Herman Egoshin, Yaroslav Krestovsky, Vitaly Tyulenev, Boris Shamanov and other artists of the famous group “Eleven”.

A special section of the collection is made up by the works on the theme of the Karelo-Finnish epic poem “Kalevala”. The sculpture section is not large: it has only about 200 works, but it includes the works of such widely recognized sculptors as Sergei Konenkov, Sarra Lebedeva, Boris Korolev, Beatrica Sandomirskaya, Marina Rynzunskaya, Moissey Weinman, Ilya Slonim, Oleg Komov and others.